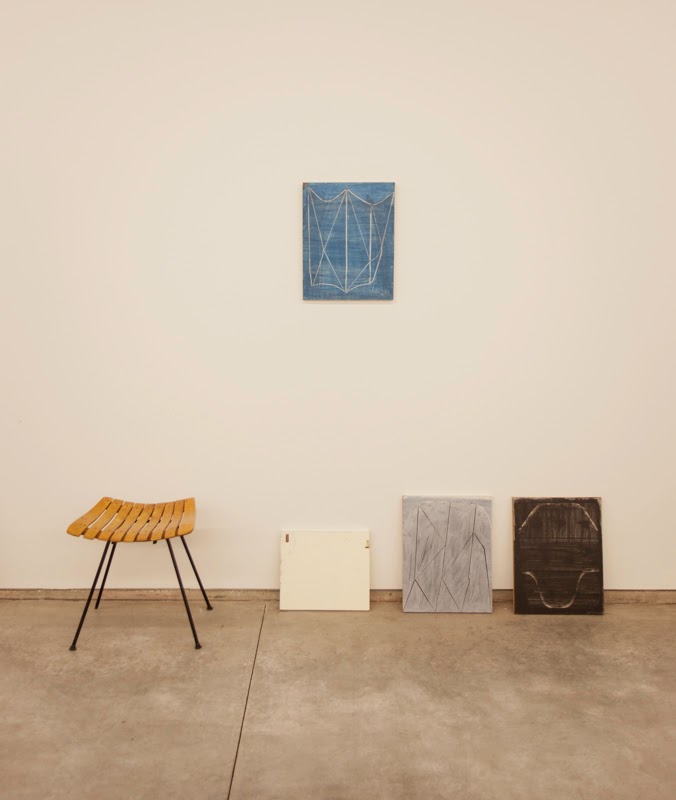 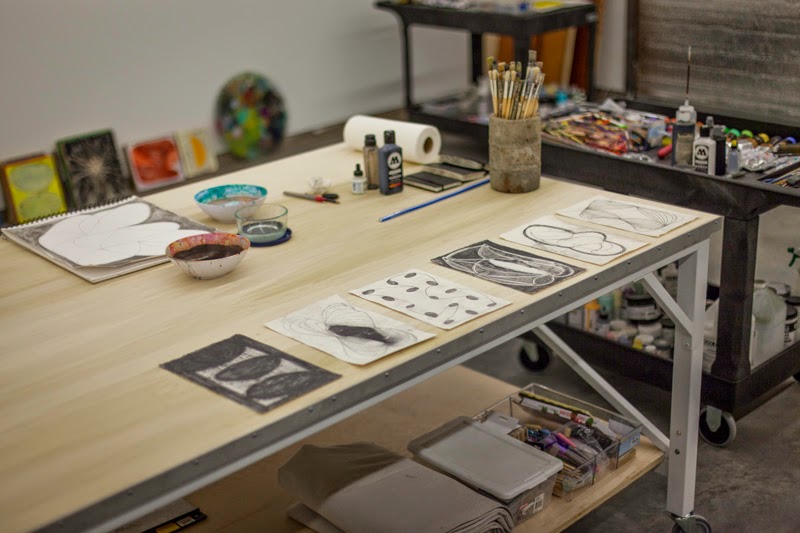 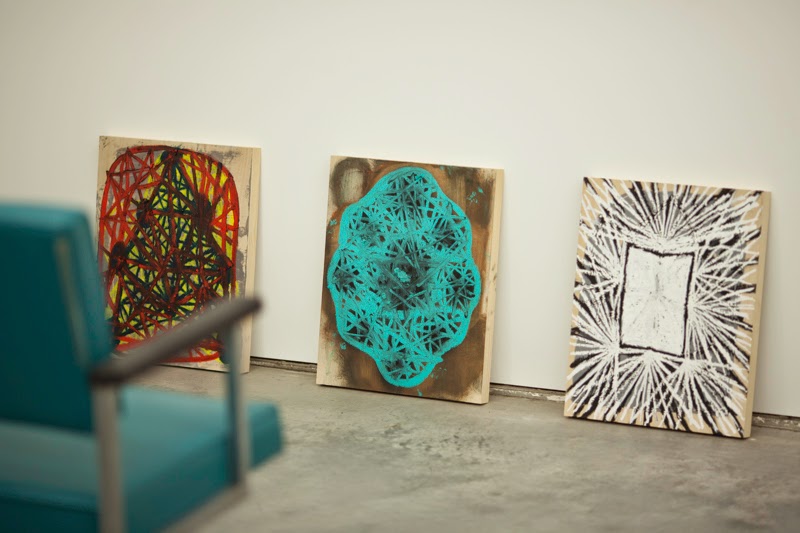 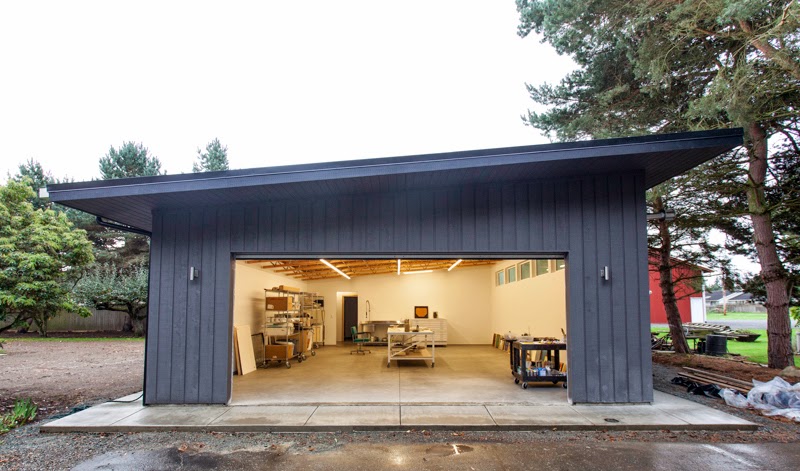 I first came across the work of Brian Cypher a couple of years ago and as I have been looking, I’ve found that it’s the range of his visual experimentation that has hooked me in and kept me coming back for another view. His paintings have a strident simplicity of composition and mark-making that I find refreshing. Also evident is the fact that drawing is integral to his practice, which is seen through his use of oil sticks, lending a feeling of primacy to his paintings.
Brian recently completed work on a new studio building, and in the following interview, he details his plans for it to serve not only as a studio, but also as a future location for art in the Seattle area.

PB:  You have just completed the construction of a new studio. Tell me about what went into its design and your plans for it to double as an exhibition space.
BC:  The idea and actuality of the new studio became real in December of last year. I had been using a converted garden shed for 5 years and I was quickly becoming smothered and cramped by that space.  I contemplated renting a studio away from home, but that idea was quickly discarded as time is already at a premium between family and the day job, so we started thinking about the possibility of building the studio next to the house. Once that idea emerged, it wasn't long before we started to make it happen.
The studio design went through a few iterations.  Like most art studio wish lists, it all started with the want for a large open space with high ceilings.  I really wanted it to feel as loft-like as possible.  The first few ideas were great but too expensive to realize. After a few tweaks, we settled on a design that matches the Mid-Century style of our house. Functionally, the studio looks like an oversized garage but with the addition of an entry, bathroom and smaller studio back room.  The overall dimension is 26 x 52 feet with the ceiling height reaching 12 feet on the high side. The garage door is a roll-up as to avoid the tracks that are usually associated with traditional garage doors. It was important to me to eliminate any unnecessary sight line intrusions.  To make the space feel more open, I went with using open web trusses like the ones used in commercial spaces. They look great and again it minimizes sight lines. The lighting throughout the studio uses T5 high output fluorescents at 3500K spectrum.  I wanted the light to be fairly neutral and avoid being too blue or too yellow. After 20-plus years of making due with various spaces, it's finally great to be in a space like this.
The realization of wanting the studio to be used as a gallery really became apparent once the walls went up. I think for a lot of artists, there's just a natural inclination of wanting to curate, and so for me it's a way to connect with the arts community and provide another outlet for viewing art.  The gallery will be called Occasional, and that also describes the program's frequency. I didn't want the ambition of showing other artists work to turn into another 'job' so I'm keeping the expectations of doing exhibitions to be on occasion. An added benefit of having a gallery space run from my studio is that the typical gallery overhead is essentially eliminated and I don't need to have sales in order to keep the project afloat. The first exhibition, titled Acquired, will feature work by over 40 artists from my personal collection. The show will go up sometime early next year.

PB:  How do you go about your work in the studio and what’s a good session like?
BC:  It starts with being open to the observation of everything at all times.  It's important for me to have lots of different work happening all at once.  I start with unknown marks and it goes on from there; it all begins with an idea that I don't know what the outcome will be.  Over the years I've developed a trust and understanding of "not knowing".  I want what I create to constantly inform me about my personal symbology.  The hardest part about working from this unknown are the challenges of recognizing what needs to stay, what needs to go, or what just needs to stay around for awhile longer, but these are great challenges to work with.  When you work from a place of instinct you are saying to yourself "I am open". When you are open to the possibility of creating something new, you have to accept all the paintings that come with that pursuit.  I'm not interested in style; I'm interested in revealing how I think about the external world and how my brain filters that input.  When I'm not in the studio I am cataloging observations all around me because art doesn't begin in the studio.  I work all over the place, on the wall, on the table and the floor.  Over the last several years, found materials have made their way into the work.  I like coming across a thrown out object and holding it for awhile until I develop a use for it and it makes its way into the work.  Also, it's about finding the right objects; I just know it when I see it.
A good session is one where a bunch of activity is happening and it feels like I don't have to stop for anything.  A good session could also be one where I spend a minute on something and it all comes together. A good session could last 10 hours and feel like nothing was accomplished but looking. A good session is the moment when a work reveals its completeness. The point is that all the time spent in the studio is valuable. You need good, bad and indifferent for things to be activated.

PB:  Are there any pigments that you’re really captivated by and are there certain color combinations or aspects of paint itself that have surprised you?
BC:  Color has really only started becoming a more important factor in my work over the past couple years.  I mean, I've used color though out my twenty plus years of painting but the way I'm paying attention to it has changed.  My palette has tended to rely on a lot of white, black and grays but color is playing a more conscious role in what it can convey.  Recently, it’s the color yellow that has got my attention.  I really love how wide the yellow gamut can appear.  It can hit a lot of notes between warm and cool.  Color choice in my work is largely intuitive.  I can look at a painting and just know what color it needs. Something I've noticed about a lot of my work is that there are usually only one or two colors that dominate. Some recent paintings that I have been working on explore a very direct use of a single color on appropriated substrate material. These are my most minimal works to date and right now they are so alive to me because the work relies so directly on color choices.  Instead of color being chosen for a component to a composition, it is the composition. This is what color can do.

PB:  As you look back through art history, whose work has been influential to you?
BC:  The two names that immediately come to mind are Picasso and Klee.  When I was 12, my English teacher included a lot of cultural enrichment moments to our class.  I remember very vividly being shown a slide of Three Musicians.  I think that was the first time I was confronted by abstraction. It was like being introduced to a visual language that was simultaneously making a statement about a situation in real life but also letting you think more about its formal aesthetics. Look at those shapes, the lines, the use of pattern and color, figure/ground relationships, etc. and of course those are all the things I can define now but then it was just a "wow" moment and needed to be investigated. Its experiences like that in life that start trajectories into motion.  This is what exposure to new things can do and it's something ongoing or at least should be.  I don't really have an anecdote for my interest with Klee, he's just been increasingly important for me over the years.  He brought so much inventiveness and every time I think I've seen most of his work, a new one emerges and it deepens my appeal of his work.  His work just covers a lot of ground and it reminds me to make all kinds of work; the good, the bad and the ugly.  The five years from first seeing Picasso until I had my first art studio at 17 was filled with a lot of looking at all kinds of art reproductions (they’re all I really had access to).
When I found the Abstract Expressionists, it was that feeling of “wow” again.  I was happy looking at all of it but de Kooning, Gorky and Marca-Relli were really inspiring to me. From there it's just a complete waterfall of interests and investigation that I searched out.  I could list hundreds of artists that have inspired me.  This also extends to the art of various cultures all over the world.  I just love looking at everything and love seeing the creation in our humanity.

PB:  What projects do you have planned in the near future?
BC:  I'm currently part of an exhibition called NOIR/BLANC at the Look&Listen project space run by Yifat Gat in Saint-Chamas in the South of France. It features 26 artists from the US and Europe. Opening December 11th at the Brian Morris Gallery in NYC is the exhibition called, Bullet in the Brain. It will feature new work by myself, Tamara Gonzales and Meg Lipke, and will be up until January 11th, 2015.  Coming up in January is an exhibition titled, South of No North, East of No West.  This show is curated by Brian Edmonds, who runs the Curating Contemporary Projects art site. This show will features 16 artists and will be shown at Lowe Mill in Huntsville, Alabama.  One final project I would like to highlight is my Manneken Press publication, Entrances, Exits, and Entropy.  It is a portfolio comprised of 12 etchings published earlier this year. I'm also planning to put together 3 shows next year in my gallery space, Occasional.
In closing, I just want to thank you so much for this opportunity to be part of Painter's Bread.