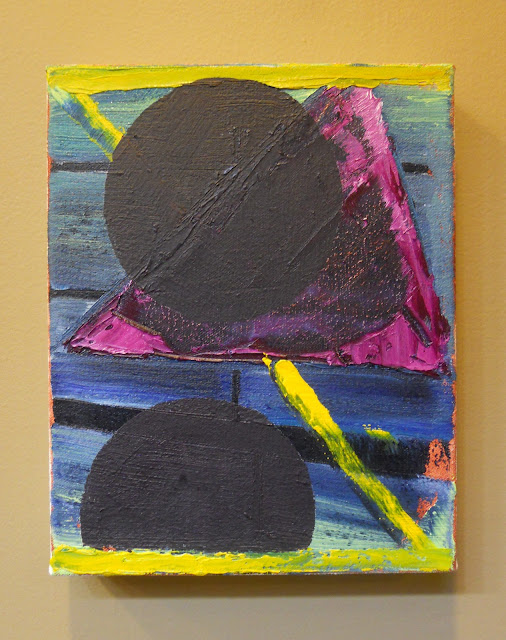 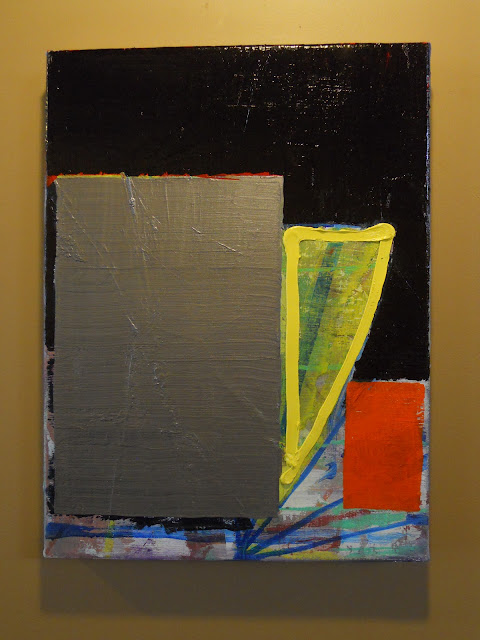 Jered Sprecher is currently showing at the Times Club at Prairie Lights bookstore in Iowa City. Here's two of his newest works from his show there, Fraktur. Also, watch for his solo show this spring at Jeff Bailey Gallery in NYC. 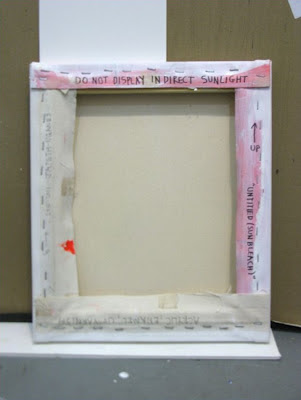 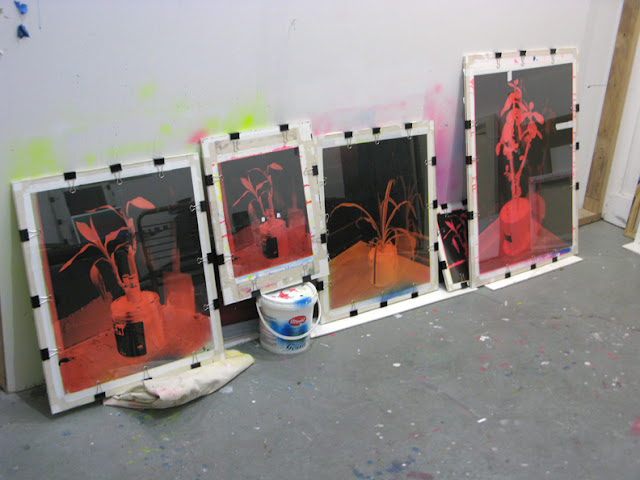 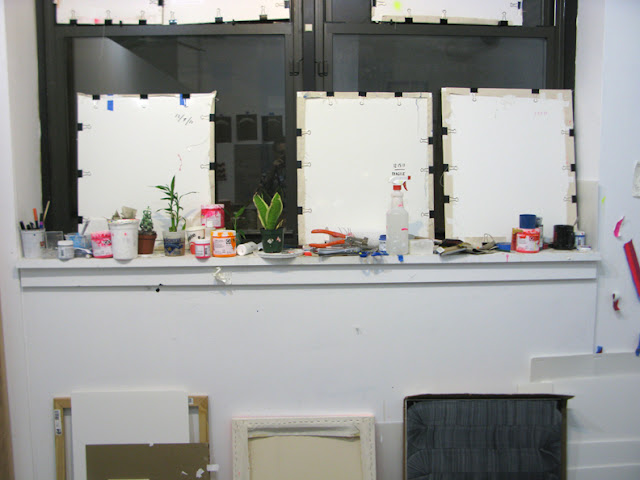 PB:  Tell me a little about how you got started in art and your education; any teachers who influenced you.

JM:  When I was just out of high school my grades were pretty bad, so there weren't any colleges knocking at my door asking me to enroll. At the time I was mostly interested in playing music and hanging out with my friends. I don't regret being a bad student in high school. I learned so much from my friends and the musicians I admired. At the time my Mom was a librarian at one of the community colleges in St. Louis, so naturally I ended up there. It was at this community college where I came across a lot of people my age who were interested in art and took it somewhat seriously. At the time I also had a teacher named John Ortbals, I feel that he was the first real artist I knew. He was always drawing on whatever scraps of paper were lying around. He was a great collector too, he would pick objects off the ground on his way to class and show them in the overhead projector. I remember there was a day when he put this beautiful flattened styrofoam cup into the overhead projector and it disintegrated from the heat of the light almost instantly, it was quite a show! He was a very creative guy, and it really helped me to be around someone who could be a real life example of what it meant to live a creative life. You could plop Mr. Ortbals down anywhere, a diner, a fast food restaurant, and he would just start drawing away. My Dad was the same way, but he was more of a writer who worked in restaurants. I think having people like that around was crucial for me, to understand how to access the wealth of creative energy that comes with solitude.

At the time I also learned to enjoy all sorts of subjects; philosophy, psychology, history. Art was the gateway for me. From there I moved on to art schools- the Kansas City Art Institute, and Cranbrook Academy of Art in Michigan. I had great teachers and colleges in both of these places as well...too many to name. I feel really lucky for that. Once I landed at Cranbrook I met Beverly Fishman. Her ability to read art and to understand what the problems are in the work are very refined. So her suggestions were very valuable to me as an art student. She's also very driven, and that is contagious. She really has a faith in art, that although it can be a tough road to travel, it's ultimately going to be rewarding.

PB:  Is there anyone whose work you're excited about right now?

JM:  I'm very much influenced by my environment and the people and things that are right in front of me. I feel like many of my friends and people I've met in NYC are making some great art right now. I'm really into the level of production that Josh Abelow has. The guy makes so many paintings, it's really amazing. But it all makes complete sense with the universe of meaning behind his work. Endless combinations of color and pattern are the fuel for his output. Jeffrey Scott Matthews makes great paintings that explore different materials and how he can use them in conjunction with intuitive systems he's created. I love the way that Talia Chetrit uses simple props in her studio, whether figures or objects, to make her photographs. I'm really attracted to economy in art, how the simple can unfold into the complex with the right amount of finesse or magic.

PB:  Your painting process seems like a collaboration with nature, can you tell us a little about it? Did you have some technical things to work out at first, and do some pigments work better with this process than others?

JM:  I'm still wrestling with the technical part of it, since I'm using the Sun the results are unpredictable. I mostly use fluorescent paint because it's so fugitive. Essentially it works like this: I start off by making a simple abstract painting, lately with minimal gestures, they start off almost like color fields. After the painting is done I take it off the stretcher and place a transparency photo-print directly on top of the painting. The subject of the photograph is usually a plant or an image of light and shadow, I like this stupid little redundancy in the work. Then I leave the painting in a sunny window with the transparency on top of it for a very long time. Since the transparency is either black or clear, and since the paint is fugitive, the areas that are clear fade into a lighter color, the areas that are black are protected. After the exposure has taken place, I re-stretch the painting and take the transparency off. What I'm left with is an image that was not rendered through paint application, but rather through transformation that took place because of the light. Nature does figure heavily in my work, and I want the meaning and the construction of my paintings to go hand in hand. For me, using the Sun is a good way to step outside of myself as the author.

PB:  You also work in sculpture and video, how did this come about and will you be delving into those mediums any further?

JM:  I used to be a drawer and never ever made paintings. I made drawing machines when I was younger, and then eventually drew like one myself. When I moved to NYC 3 years ago I started painting and now I no longer have any ideas in drawing. I hope to draw again someday, but it's not where I'm at right now. I make videos and sculpture so sporadically, it really only ends up being a small part of my practice. But those videos and sculptures I do end up making can become very important to me. It's always been this way for me. The videos and sculpture tend to roll around in my head long before I end up making them. Or like right now, I have an idea for a set of photographs I've been wanting to make for some time.

JM:  I'm still mining the Guided by Voices catalog. I can really relate to how they take the history of rock and roll and filter it through to a crummy basement recording that they made in an almost hand-made way. On some songs it's them doing the Stones, on some it's them doing the Kinks. Even when Robert Pollard performs, it's like he's acting out his interpretation of a rock star with his high-kicks and dancing. To me, he's still a 4th grade teacher doing music on the side. I can relate to that with art making. Taking a history or idea that's bigger than oneself, and filtering it through to an intimate gesture. For example, looking at how photography and painting works, how humans have created images over the years, and making your own inventions based on that.