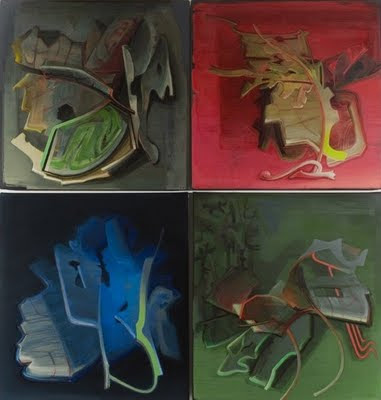 Entanglement, 2009, oil on linen mural, 57" x 54"
In 1977, Sue Hettmansperger joined the faculty at the University Of Iowa School of Art in Iowa City, and has been an important influence there ever since. I first saw her work at a U of I faculty art exhibition some years ago. What impacted me most were her color sensibility and inventiveness of form. The paintings also exude a quality I refer to as “tug”—they pull you closer. As I was drawn in, I was in awe of their finish as the mark-making became evident. The many layers of brushstrokes in a wide spectrum of color almost seem knit together. 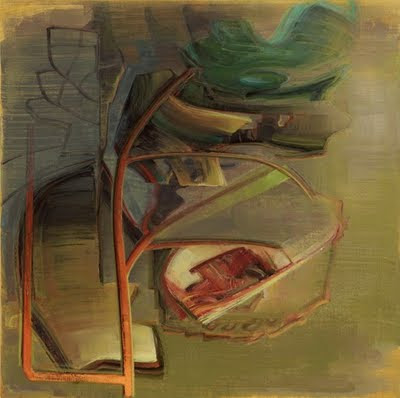 In an interview with Sue, I asked her about the forms in her paintings as they seem to be in a state of metamorphosis. She told me that in her earlier work, she used more organic forms from nature, but has increasingly incorporated more diverse sources for her imagery such as man-made objects. I commented that the paintings seem timely and emblematic of what may be occurring in nature right now and she shared with me her concept of “the complexity of life embodied in a painting” and that there is a definite “fusion and entanglement” to her forms that can be interpreted as ecological. 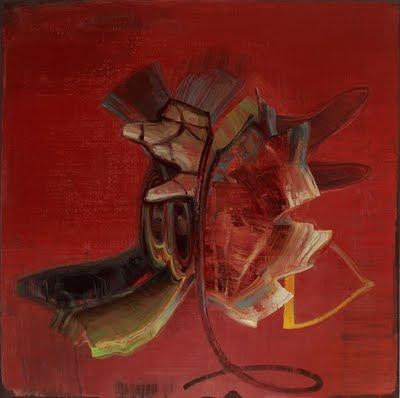 As for her colors, Sue credits a video collaboration as an influence on their recently more intense saturation. Her husband, who is a composer, wrote the music while Sue added the graphics. The digital video with its “acidity of color” as Sue said, opened up another range of color for her that she eventually used in her paintings. Towards the end of my interview with Sue, we talked about how painters should keep on progressing in their work and she summed it up, taking that thought one step further by saying, “paint to learn about life”.

Sue Hettmansperger’s work can also be seen at A.I.R. Gallery.